The Giving Garden 2019
Ian and Judy Wintle are opening their ‘Giving garden’ for the 18th consecutive year on 23 and 24 November 2019.
Why is it called ‘The Giving Garden’? Well it gives so much pleasure to us, our family and friends and visitors.
Plant Passions, yes, Ian loves Amorphophallus, Costus and Beehive Gingers, Judy loves her Bromeliad’s and is a great propagator of plants.
The garden microclimate is provided by over 50 fruit and nut trees and the understory is full of colourful and interesting tropical plants some of which are extremely rare.
The fruit we pick is shared among family and friends and not forgetting the abundant wildlife.
Why do we open our garden? We love meeting so many gardeners who have similar interests to us and people just love the atmosphere here which is relaxing and of course interesting, we say it is a  ‘visitor friendly’ garden.
What happens if it rains? In 2017 it absolutely poured with rain both days and yet we had over 600 visitors who took their shoes and socks off and walked the garden.
Will refreshments be available? A coffee van will be situated on the front lawn with coffee, tea and homemade cakes available to purchase, there will also be a toilet available.
What is the worst thing that could happen? A repeat of 2009 where it did not rain for seven months and the garden was drought stressed.
What has the garden done for you? We have raised over $60,000 for charity mainly through a local ‘Lions Club’ and in 2017 were honored by Redland City on Australia Day as ‘Local hero’s’. We also won ‘Gardening Australia’s ‘Golden Trowel’ and have appeared on many Television programs.
What prompted you to start opening?  After finishing University our eldest son Scott went backpacking in Europe for a year. Only a couple of weeks before he was due to return home, we received news from Switzerland that he had broken his back in a motorbike accident and would never walk again.
The months that followed drew on our mental, financial, and physical strength. It was not for a further six months that he could finally return to his home. By that time not only he needed rehabilitation Mum and Dad also did.
Our garden gave us the ability to heal, it was our rehabilitation and two decades on; it has blossomed into a lush sub-tropical oasis, featuring some of the world’s most exotic unusual plants and fruit trees.
In 2001 we opened for the first time through the ‘Open garden Scheme’ (This scheme has now folded) so we now open privately. 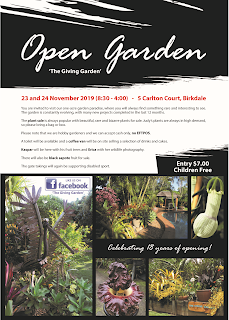 Is our garden sustainable? Very much so, water has always been a big problem and about 10 years ago we decided to sink a bore, this was a disaster because all we found was salt water.
We now have seven rainwater tanks holding 109,000 litres of rain water, solar power, worm farms, native bee hives, large compost bins and use around 150 bales of sugar cane mulch in the garden every year.
Has the garden changed over the years? It would be unrecognizable for those early years, every year we complete garden related projects and this year has seen more work done to improve the garden. We have done all the work ourselves, with the help from our trusty wheelbarrow and shovel, everything has been done on a budget, in other words it is a true ‘Gardener’s Garden’.
It’s not been an easy garden to establish with all topsoil taken away by the developer and no underground water, but we have persevered to the point where we have a garden that is one of the best in SEQ.
Scott is now a of father of two children and a World Champion Disabled Water Skier, he recently returned from the World Championships held in Norway with a Gold, Silver and two pending world records.
We have welcomed many bus tours through our garden and have given almost 200 power point presentations to gardening and service clubs throughout Redlands and South East Queensland.
Physically we keep fit working in the garden and mentally Ian has a garden blog at  http://ianjudy.blogspot.com/ over 350,000 people from over 100 countries around the world have seen our garden this way. The blog has been archived by the Queensland State Library as being of significant importance to the state of Queensland.
Ian also has a Facebook page called ‘The Giving Garden’ which has over 2600 followers and another Facebook page ‘Open Gardens and Events Queensland’ where people who intend to open their garden or have a gardening related event can post information. This was badly needed as the ‘Australia’s Open Gardens’ Scheme closed down in June 2015. He also has a web site reviewing garden products http://www.gardenproductreviews.com/
Gardening has not quite taken over our lives as we are very family orientated and we feel blessed to have a wonderful family, two sons with four Grandchildren all of whom are close to our hearts.