After 11 consecutive open gardens through ‘Australia’s Open Gardens’ we thought 2013 would be a good time to take a break.
We went through a horrendous six months, with virtually no rain from mid July 2012 to late January 2013, then in January 2013 a massive storm did a moderate amount of damage to the garden.
After all this we really felt like a break, gardening had become very difficult.
A week ago we received a plea from the ‘Moreton Bay Lions Club’ asking us if we would open our garden in order to raise funds for an 8 year old boy who suffered from Cerebral Palsy and was in dire need of a ‘Flux Walker’.
The walker would give him independence and lessen the burden on his family.
Having gone through a similar situation ourselves (our son is a paraplegic as a result of a motorbike accident) how could we say no.
So, we have decided to open our garden on the 16th and 17th of March between the hours of am to 4 pm.
The entry fee will be $5 and there will be refreshments all day. The Lions ladies will be cooking home-made delicacies and there will be Devonshire teas and a sausage sizzle.
A local hardware store has donated some great raffle prizes.
All proceeds will go to the Lions Club to be distributed to the boy.
We usually open our garden in November, so this will be our first opening at this time of year.
The garden is looking great and in particular the ‘Beehive Gingers’ will be spectacular. 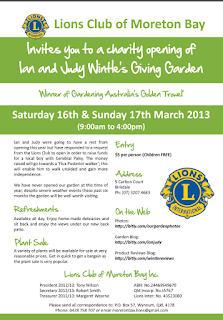 Anyone who can help to publicise this event would be most welcome.