I must admit costus are my favourite plant, they are sometimes known as spiral gingers due to the growth habit of spiralling upwards.
One of the biggest problems when purchasing these plants is the misnaming by nurseries either on purpose of by mistake; our local nursery recently was selling ‘french kiss’ as costus ‘malortieanus’.
Most costus look the same when young and sometimes it is not until a couple of years later that you realise that you have been done, either through ignorance or on purpose. I know as I have bought a rare costus by mail order only to find later that it is really a ‘spicatus’ (Indian head) which is probably one of the most common of the costus family.
There are many different names for each one, take ‘barbatus’ sometimes known as ‘comosus’ or ‘red tower ginger’. 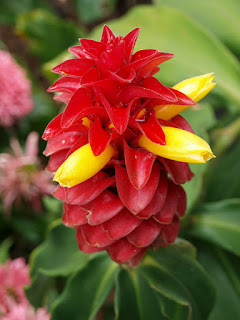 Propagation is quite easy; the ‘speciosus’ variety give off small side shoots and all these will give you a new plant. With ‘barbatus’ the root rhizome can be divided or you can cut the old stalk off after flowering and cut into pieces about 8inches long and place in a good potting mix, we have a high success rate with this method, otherwise just place the whole stalk just under a layer of mulch in semi shaded spot in your garden and leave it, eventually it will give you several new plants, Couldn’t get much easier than that.
Costus flowers range from white, yellow and red, some cone on the top and others cone on the base of the plant.
Costus ‘dubius’ has an excellent green cone with white flowers and when massed makes a great show. 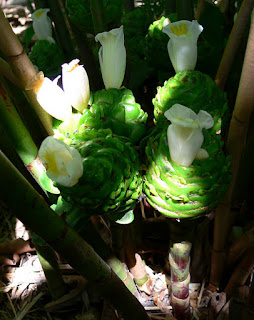 The yellow flower offshoots on the costus ‘barbatus’ flowers are very edible and can be eaten straight off the plant or are excellent in a salad, another interesting factor with ‘barbatus’ is the smooth silk feeling of the underside of the leaves, I call this the sexiest plant in my garden.
The largest Costus in my experience is guyanenis ‘buddas belly’ this can grow up to three metres in height.
Costus rhizomes are used in Asia for medicinal purposes.
My favourite costus are ‘barbartus’, ‘productus’, ‘green mountain’, ‘pulverulentus’, ‘costa flores’ ‘red stem’, ‘asplundii’, ‘dubius’ and ‘french kiss’ all of these grow well for me. I have had problems with variegated ‘amazonius’, ‘eskimo kiss’, ‘tappenbeckianus’, and sorry to say cuspidosis ‘fiery’.
I have about 36 different varieties of costus.
Costus do well in understorey positions with filtered light, they like plenty of water but not waterlogged.
Remember the more hairy the costus is the more cold sensitive it is.
All in all they are a great landscaping plant which will give you years of pleasure, of course the better the soil and having the ability to give them good watering will make them healthier.
Posted by Ian at 7:04 pm

It's cool..! Very useful info of Costus..! Is Costus ‘dubius’ edible..? Can we eat leaves, flowers, rhizome/roots of Costus dubius? Isn't it harm to humans?